The nations of Minaria again march to war in this session of DIVINE RIGHT. We continue the game between the nations of Mivior, Shucassam and, Pon. Who are played by, Myself, Jared and, Were-Puppy respectively.

Last time, Jared's Shucassam managed to gain the strongest alliance with the grand organization of Immer, Muetar and, Elfland to its ends. Mivior was a distant second in power but, with naval supremacy with it's ally Hothior. Pon alone continues to hang on in the east, maneuvering to it's own ends.  What follows are the highlights. 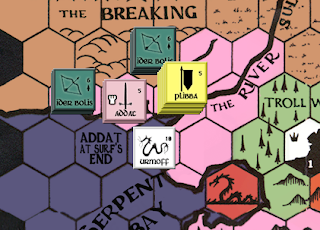 A few weeks in, Muetarian reinforcements arrive at the Miviorine port of Addat, granting a major advantage to the Shucassami-aligned besiegers. The attack is made upon the beleagured fortress....

Welcome to another DIVINE RIGHT battle report! There were actually two games this past Saturday but, I'm going to focus on the second because the first didn't get too far. The first game will get written up once we get a few more turns on it.

Thus, the nations of Minaria again march to war, this time in the ADVANCED GAME. This game features Jared as Shucassam, Were-puppy as Pon and, yours truly as Mivior. The first couple turns are uneventful. With the various powers grabbing allies and, maneuvering forces for sieges. Mivior managed to grab Rombune and, Shucassam managed to ally with Muetar. Pon is unlucky in diplomacy but, manages to get a special mercenary, Ogsbogg the Ogre. What follows are the highlights. 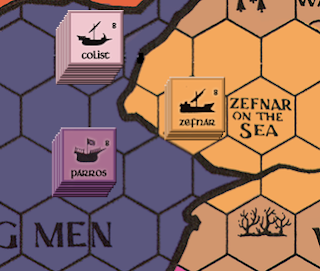 Minaria is at twilight, little time remains before winter falls on the continent ending the campaign season. Here is the final session of the game that started on the 25th of March. The players are, Were-puppy as Hothior, Jared as the Dwarves and, myself as Zorn. 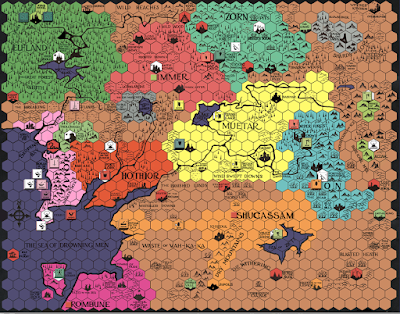 Last game there were several climactic battles around Castle Lapspell, which put the primary Goblin ally of Muetar to flight. The Dwarves where able to overcome fortune's disdain and began to make gains against their enemies. Hothior continued to be bogged down in the coasts of Mivior but, with they managed to prevent the aforementioned siege of Lapspell. The Goblins were driven to retreat from central Minaria by the same event. From here, we continue.

Read more »
Posted by HereandNow at 6:18 PM No comments:

Bioware discovers that they will never, ever, be satiated:


At BioWare, we strive to make games that are representative of our players and the broader world around us. We do this by actively consulting within our diverse workforce, as well as speaking with different communities.

In Mass Effect: Andromeda, one of our non-playable characters, Hainly Abrams, was not included in a caring or thoughtful way. We apologize to anyone who interacted with or was hurt by this conversation. This was never our intent, and was an unfortunate byproduct of the iterative process of game design and a change in the structure of the character's dialogue.

We have had several discussions with members of the transgender community, both internally at BioWare and in the broader community, and we are working to remedy this issue. Once the changes are implemented, Hainly will only reveal certain information to Ryder after they have developed trust, and only if the player chooses to support her.

As always, we appreciate the help, feedback, and support from the Mass Effect community.


Once you started feeding the SJW, he always ends up devouring you.
Posted by VD at 2:08 AM 1 comment:

Email ThisBlogThis!Share to TwitterShare to FacebookShare to Pinterest
Labels: Failures

The war-drums beat, soldiers march, knights ride and, war again comes to Minaria. This week is just a continuation of last week's game, coincidentally taking place on April Fool's Day. Unfortunately, I couldn't think of any good jokes for this post, so it will have to go uncelebrated here (alas). 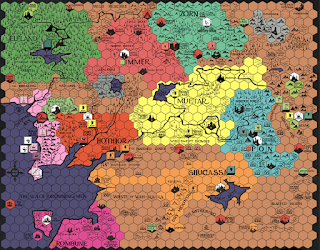 This game consists of Were-puppy as Human Monarchy of Hothior, Jared as the Dwarven Kingdom of Ghem and, Myself as the Goblin Sirdarate of Zorn. At the end of the last game, Hothior had Pon and Rombune as allies. Zorn had Elfland, Mivior, Muetar and, Shucassam to call upon. The Dwarves had only Immer to aid them. What follows are the highlights. 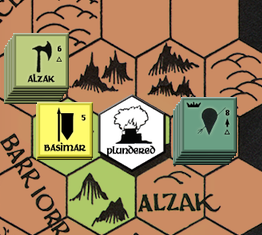 The Dwarves commit to their attack on the recently victorious besiegers of Aws Alzak... 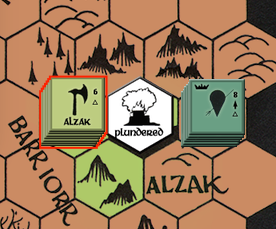 ...and utterly annihilated them. This leaves only the Goblin royal army as the only significant military force against the Dwarves east of Pon. 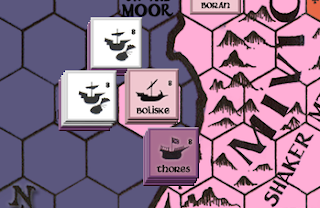 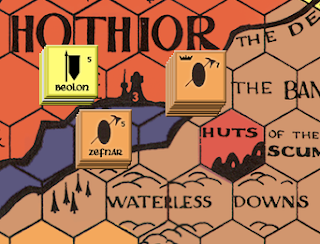 Meanwhile in Hothior, the Sirdar instructs his allies to continue their campaign against the human kingdom. The addition of the Shucassami fleet allows them to target Hothior's ports. Castle Lapspell in Hothior is put under siege. 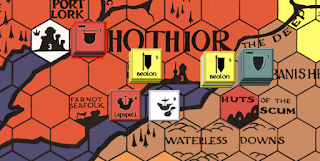 Unfortunately, prudent Hothiorian diplomacy was able to frustrate a major pillar of the Goblin's campaign in Hothior convincing Shucassam to drop from the Goblin alliance. This is coupled with fortuitious news weeks later. Where freak events cause Shucassam to join with Hothior despite Pon violating the sovereign territory of the desert kingdom. This allows Hothior to send the Ponese Royal army to Lapspell. As well as send Hothior's small fleet to harry the recently arrived sea-borne besiegers. 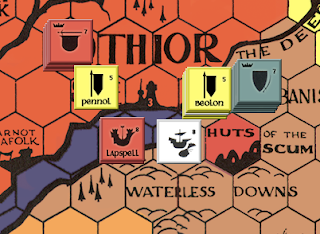 The Zorn mercenary fleet retreats from the Hothiorians but, the Goblins suffer a major loss west of Lapspell. Their Muetarian allies from the city of Pennol were defeated with heavy losses. 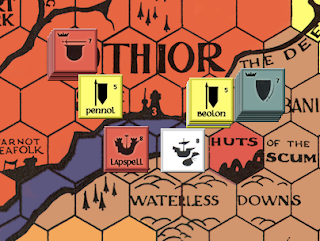 The battle goes poorly west of Lapspell as well, with an attack by the Ponese Royal Army causing intense causualties to the Muetar regulars of Beolon. 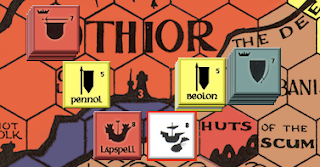 The following weeks, the mercenary fleet fought the Hothiorian Navy outside of Lapspell and.... 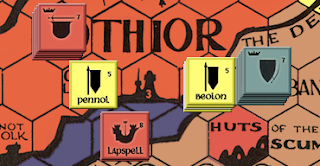 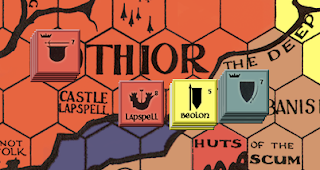 The victorious fleet moves in the port, having broken it of it's siege right after the remnants of the Eastern besiegers fall to the Hothiorian Royal Army. 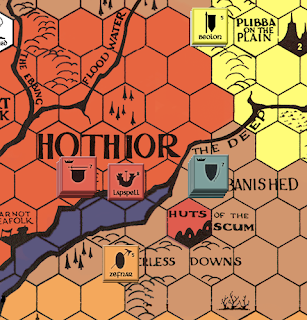 The situation in Hothior now untenable, the Goblins have their allies retreat. 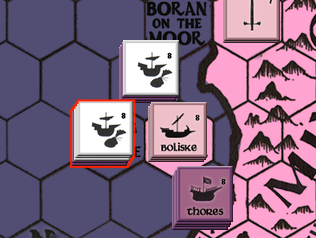 Despite their victories to the east, Boliske continues to bog-down the Rombuni Fleets limiting their application to the Hothiorian cause. 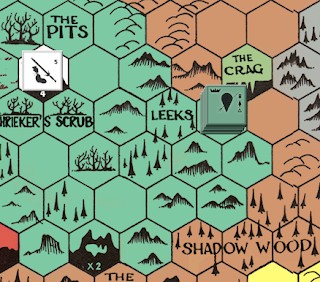 In the North, the Goblin Royal army was able to escape from the Dwarven army that took out their allies around Alzak and, now returns to their home territory. 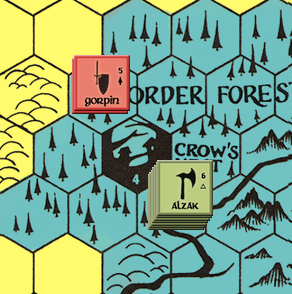 The Dwarves decided against their pursuit of the Goblins and instead gathered their forces to the east of the Archduchy of Pon. The allied armies fall upon the castle of Crow's Nest. 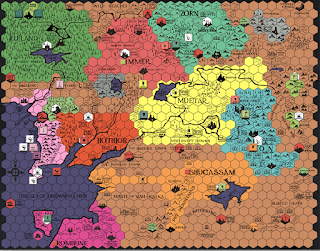 Things are becoming clearer in Minaria at the end of this session. The Goblin hegemony in the last game proved all too fragile in Eastern Hothior, despite their large alliance. Hothior managed some excellent diplomatic and military work. Successfully preventing further incursion into their territory by causing the rout of a major Goblin force. Albeit with no increase in their plunder. The Dwarves managed some minor victories in the East followed by the siege of the significant fortress of Crow's Nest, while Hothior was occupied elsewhere. Zorn accomplished little this session, losing nearly every battle fought. Their forces are all currently moving away from their enemies, perhaps to some objective? Only time will tell.

Despite the fact that this session was kind of short in terms of actual game time, a lot happened, particularly in Hothior. Jared ended up solidifying his gains in the east and bringing the fight west.
My Kingdom, Zorn, really fared poorly, I don't think anything good happened at all. Were-puppy on the other hand, ended up completely trashing the respectable army that was tearing through Hothior. Although, when we got to talking one thing stood out to me the most: the acquisition of Victory Points.

There are only two ways to win a game of DIVINE RIGHT, you can kill all of the enemy player Monarchs or you can be the player with the most Victory Points at the end of 20 turns(assuming you are playing the standard game). The former option is both incredibly risky and rare. Even if players aren't protective of their avatars, it's only about a 33% chance to kill or capture after you've triggered a fate roll. Which already relatively rare to get, unless you have some lucky battles involving enemy monarchs or, manage to have your slow military catch-up with one of the speedsters. Otherwise, there are only two ways to acquire Victory points: sieges and killing or capturing a monarch(not necessarily a player monarch). As it can be tricky to kill or capture any monarch in game, it's really more of a bonus mechanic, this leaves sieges.

If you'll notice with this and other games' write ups, I often write about climactic sieges and the battles that allow for or deny them. Getting and accomplishing sieges is the primary goal in DR. It is the only goal that is really stable and reachable under all conditions and states of the game. Capturing a monarch is a nice bonus but, can't really be relied upon to deliver those precious VPs. Not to mention monarchs can hide in castles if things aren't going their way, cementing their secondary status.

Otherwise, while I expected a certain amount of uncertainty, I didn't expect such a massive cause and effect cascade that whooped my allied forces in Hothior. Both events and turn order favored this reversal combined with Were-puppy's skill in exploiting it. Resulting in the loss of a decent siege, no less.  Although, as is always the case in DR, it's not over yet!