Again we come to Minaria. This week is actually a continuation from the July 1st game, between lastRedoubt, Jared, and yours truly. Who are playing as, the Trolls, Pon and, the Black Hand respectively. 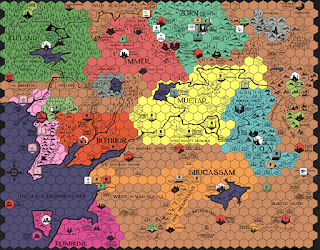 Last time, Pon was far and ahead in the lead in both power and victory points. They count both Shucassam and Muetar as their allies. The Trolls were second in power but, had allied themselves with Zorn and Hothior. The Black Hand is last, having lost allies left and right, including Shucassam and Immer. From here, we begin.
Read more »
Posted by HereandNow at 2:54 PM No comments:

Alright after a brief hiatus last week, we have another battle report this week. Where Aerospyke, Jared, Werepuppy and, yours truly vie for the dominance of Minaria through our avatars. Who are the monarchs of the Dwarven kingdom, Zorn, Mivior and, the Elvish kingdom. From here, we begin. 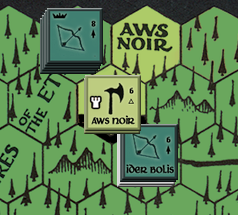 In the far northern reaches of the great forest of Neuth, the Elves move against the Dwarves at their outpost of Aws Noir.

Read more »
Posted by HereandNow at 2:16 PM No comments:

Spudbox wanted to know about my inspiration. The dictionary definition isn't that different from "motivation": the process of being mentally stimulated to do or feel something. What is it really?

It also means "where do your ideas come from?" Let me see if I can answer that more interesting question now that I've completed the title screen music.

First I looked at the title screen art. This image has been featured on this blog before. (Hat tip HereAndNow.) 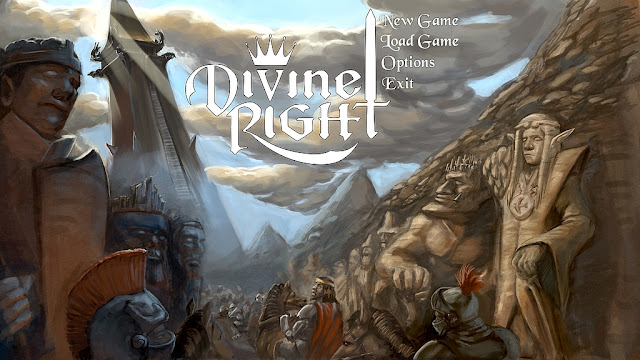 What stands out here? The light shining down from the heavens through the tower to the statues staring down onto the monarch, and monarch looking up at the statues. I get a sense of the monarch being aware of this exact moment in history, and comparing himself to the great men of the past. Also, the light, the tower, and the army signify the marriage of martial and magical forces.
The image evokes physical sensations as well. Between the stone and the light, a sense of brightness and heaviness, all at once.

Do I think about this consciously? No. I'm observing my emotional reactions and how my eyes follow the various elements on the screen.

Then I studied the game's lore. An ancient empire. The Scarlet Witch King. The Cataclysm. The Fall of the Lloroi. Barbarian tribes becoming kingdoms. The war for Minaria. In all this, the fall of the Lloroi stood out. It sets up everything that follows - perfect for the title screen. Now I was working with light, stone, magic, war, and the fall of an ancient, powerful race.

Keeping these elements in mind, I wrote this piece.

Posted by Jared Burrell at 6:26 PM No comments:

Another week of war in the world of Minaria. This week is a three way struggle between the kingdoms of the Trolls, Pon and the Black Hand. Who are played by special guest lastRedoubt, Jared and, yours truly respectively.

The opening of the game was fairly slow. The Black Hand as able to acquire Immer as an ally.The Trolls were able to gain Zorn. Pon ultimately gains Muetar as an ally to use to its ends. From here we begin. 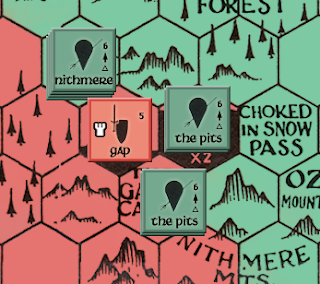 Zorn and Immer ended up at each other's throats in the mountainous regions between the two kingdoms. Here the Gap Castle holds the line against the Goblin hordes while under siege.

Read more »
Posted by HereandNow at 6:28 PM No comments: